Agro and food-based, biotechnology, bulk drugs and pharmaceuticals, IT and ITeS, textile and leather, tourism, automotive and auto components, gems and jewellery

Andhra Pradesh (AP) is located in the Southern peninsula of India and has a coastline of 972 km. The state of Andhra Pradesh is bound by Chhattisgarh on the north, Odisha on the northeast, Telangana and Karnataka on the west, Tamil Nadu on the south, and the Bay of Bengal on the east.

The state has well-developed social, physical and industrial infrastructure and virtual connectivity. It also has good power, airport, IT and port infrastructure. At current prices, Andhra Pradesh’s Gross State Domestic Product (GSDP) was estimated at US$ 77.2 billion over 2012-13. Between 2004-05 and 2012-13, the average annual GSDP growth rate was 15.2 per cent.

It is the first state in the country to have enacted the Industrial Single Window Clearance. The Act made it compulsory for new industries to register with the single-window to obtain clearances quickly. It also simplified procedures for getting industrial clearances. The state also has separate acts for development in sectors such as solar power, electronic hardware and food processing. 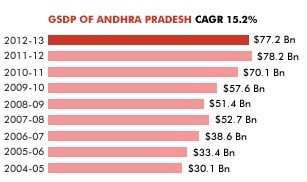 At current prices, Andhra Pradesh’s gross state domestic product (GSDP) was estimated at US$ 77.2 billion over 2012-13 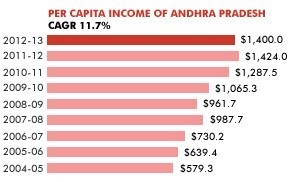 Per capita Income of Andhra Pradesh