Manipur is situated in the eastern-most corner of Northeast India. The state shares borders with other north-eastern states of Nagaland, Mizoram and Assam and the neighbouring country of Myanmar.

Manipur has the advantage of acting as India’s ‘Gateway to the East’ through Moreh town, which is the only feasible land route for trade between India and Myanmar and other Southeast Asian countries.
With about 3,268 square km of area covered by bamboo forests, Manipur is one of India’s largest bamboo producing states and a major contributor to the country’s bamboo industry.
Manipur has the highest number of handicrafts units as well as the highest number of craftpersons comprising skilled and semi-skilled artisans in the entire north-eastern region.

Handlooms is the largest cottage industry in Manipur and the state ranks among the top five in terms of the number of looms in the country.
The Ema Bazaar is one of India’s largest markets run by women. This market majorly sells handloom and handicraft products such as earthen pots, knives, shawls and puppets; as well as all kinds of dried fish and vegetables.

Imphal has one airport and Air India provides air cargo services. Four national highways run through the state. The railway line under construction on the Manipur-Assam border is a national priority project. Manipur has a land area of 22,327 sq km and a pollution free environment. 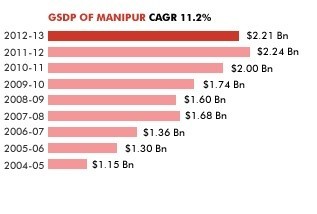 At current prices, the total gross state domestic product (GSDP) of Manipur was about US$ 2.21 billion in 2012-13.

Break up of outstanding investments in Manipur